Camden Council has prepared a draft Vision and Urban Strategy for Holborn and they are running a public consultation open to local residents, businesses, workers, community groups, and everyone else who has an interest in the area.  Their primary aim is to produce a Planning Strategy document to guide Camden's Planning Committee's decisions on construction projects in the area.

We intend to submit a response by the Cycling Campaign because it clearly interacts with and should complement the Holborn Liveable Neighbourhood Scheme for which funding of around £12m has been announced by TFL and Camden.  The draft for the Vision and Urban Strategy references the Liveable Neighbourhood Scheme and outlines its main proposed actions including the proposed segregated cycle tracks on New Oxford Street and Theobolds Road, so there is no reason to fear a conflict. But the responses to this consultation may have some implications for the LN, so we should respond stating our priorities.

Both schemes propose the removal of the Holborn gyratory and the closure of its Procter Street arm creating a traffic free space there instead. 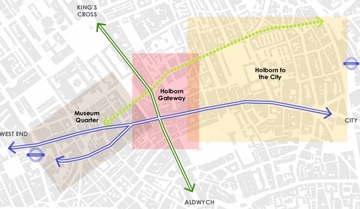